What is Feline Immunodeficiency Virus (FIV)?

If you’ve ever owned (or been owned by!) a cat, chances are you’ve heard the acronym “FIV.” You know this is something your veterinary team talks with you about during your cat’s wellness visits and preventive care planning, and it probably helps your understanding to liken the Feline Immunodeficiency Virus (FIV) to the AIDS virus in humans because of their similarities. Now, let’s look even deeper into FIV, your cat’s risk, and treatment for infection:

Which cats are likely to be infected with FIV?

FIV is transmitted primarily through bite wounds that occur in cat fights - unfriendly cat interactions. However, other interactions between cats, like sharing food and water bowls or grooming tools, have not been shown to be significant in transmission.

What are the clinical signs of FIV infection?

A cat can actually be infected with FIV for a prolonged period before becoming noticeably ill. This period is known as “viral dormancy.” In fact, this dormancy, or incubation, can be as long as six years! This means that FIV is generally not diagnosed in very young cats.

When signs of illness start to surface, you’ll likely see signs that the kitty just doesn’t feel well: refusal to eat, weight loss, and lack of self-grooming. Most commonly cats will experience a severe infection affecting the gums, just around the teeth. Also, any wounds that occur could be quite slow to heal. The same is true for respiratory infections; they may linger much longer than would be normally expected. A cat with FIV might also struggle with persistent diarrhea. Ultimately, widespread organ failure can occur. 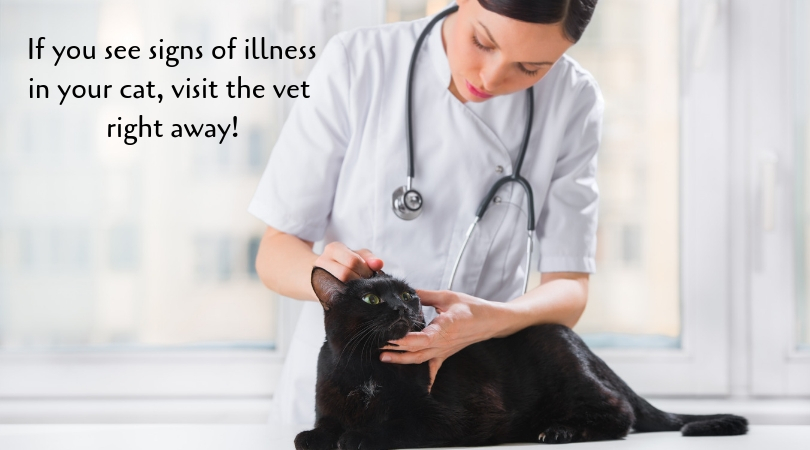 How do we diagnose FIV?

There is a simple blood test to check for exposure to Feline Immunodeficiency Virus. A positive test means the cat has been infected with the virus and will likely remain infected for the remainder of his or her life. It can also mean the cat was vaccinated with the FIV vaccine - there is no way for the test to distinguish between a vaccinated and an infected cat.  A negative test may mean that the cat has not been exposed; however, false negatives do occur.

Why would an FIV test have a false negative result?

It may take up to three months after the initial infection for an FIV test to show a positive result. This means that, for up to three months, the test may be negative even though the virus is present in the cat.

Rarely, the test may also turn negative when a cat becomes terminally ill with FIV. This occurs because antibodies (immune proteins) produced against the virus become attached and bound to the large amount of virus present. Since the test detects antibodies that are free in circulation, the test may be falsely negative.

The vast majority of kittens under four months of age that test positive for FIV have not been exposed to the virus. Instead, the test is detecting the antibodies that actually were passed from the mother to the kitten. These antibodies may persist until the kitten is about six months old; therefore, the kitten should be retested at that time. If the test remains positive, the possibility of true infection is much greater. If the kitten tests negative, there is no cause for worry. 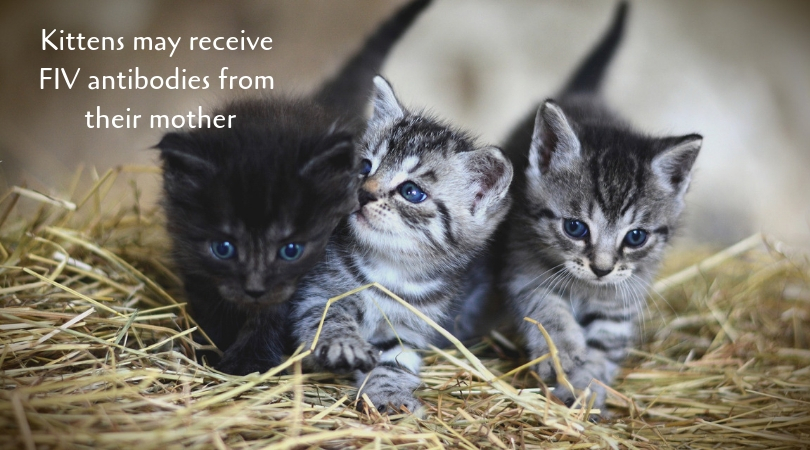 If an FIV-infected cat bites a kitten, he or she can develop a true infection. However, the FIV test will usually not turn positive for several months. If a mother cat is infected with FIV at the time she is pregnant or nursing, she can pass large quantities of the virus to her kittens. This means of transmission may result in a positive test result in just a few weeks.

How is FIV treated?

It is important to note that there is no cure for FIV. However, the disease state can sometimes be treated with antibiotics or other drugs to stimulate the immune system, restoring the cat to relatively good health. The virus may become active at a later date, so FIV is a chronically-managed condition.

If you have a cat that tests FIV-positive but is not ill, as long as the cat does not fight with other household cats or those of your neighbors, transmission is not likely to occur. But if the cat is prone to fight or if another cat often instigates fights with him or her, transmission is likely. In fairness to your neighbors, it is generally recommended to restrict an FIV-positive cat to the house. Owners of infected cats must be responsible so the likelihood of transmission to someone else's cat is minimized.

Can this virus be transmitted to me or my family?

The feline immunodeficiency virus is cat-specific. It does not infect humans.

How can I prevent my other cats from getting infected with FIV?

Spaying or neutering your cats and keeping an infected cat indoors are the best preventive measures for this virus. Depending on the cats in your household, it may be recommended to keep an FIV-positive cat separated from your other kitties. Talk with your veterinarian for specific recommendations.

If you have any questions about FIV or any conditions that may affect your cat, please don’t hesitate to reach out to us! Chronic conditions can be managed, and we want to be your allies in keeping your beloved cat as healthy and happy as possible!